Stuck in a Persuasion Loop? 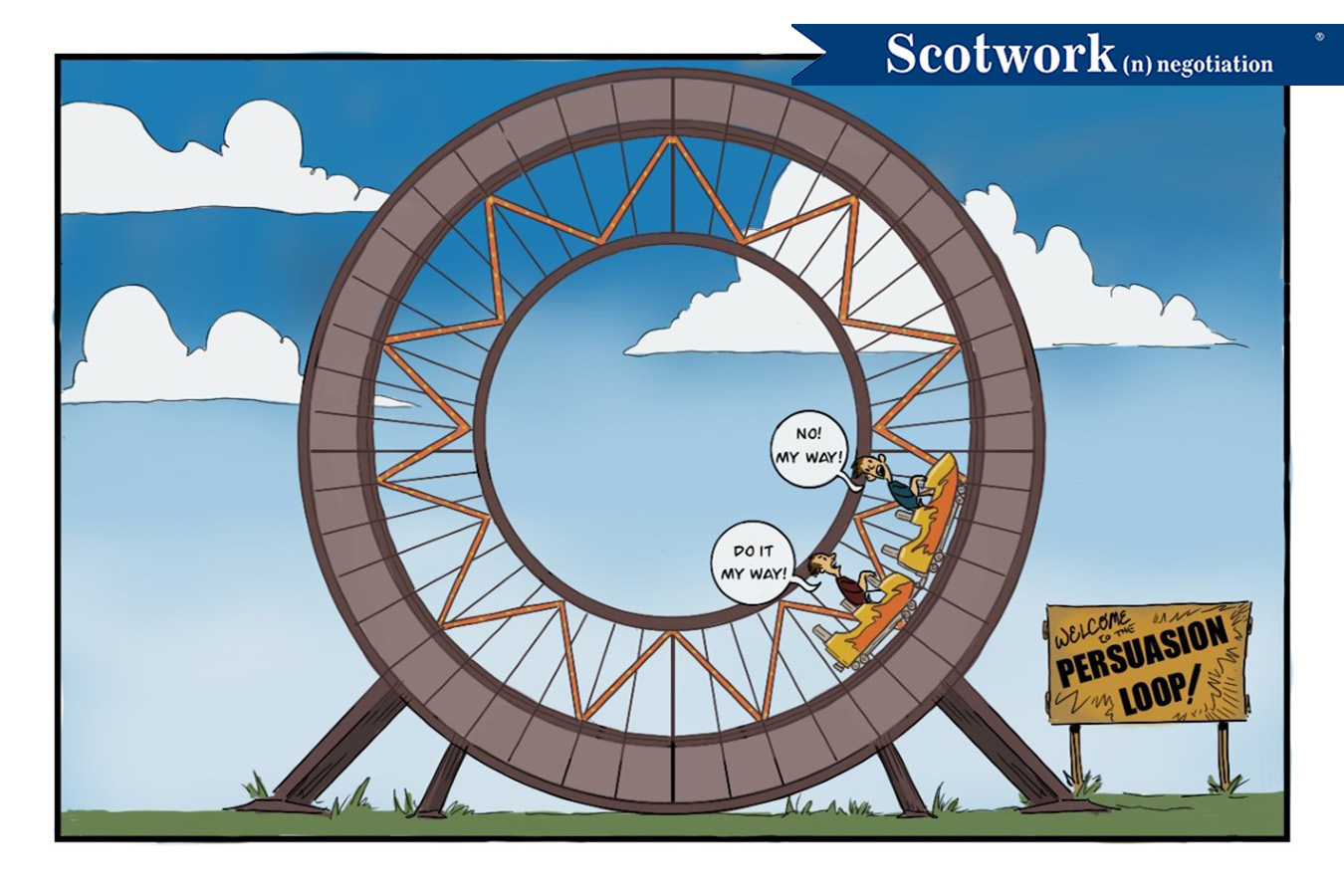 When we’re negotiating, most of us focus on what we want. It’s the impulse to convince our colleague or spouse to agree with us. The negotiators I work with have repeatedly revealed that the desire to be right and win has a deeper connection to feelings of self-worth than to the deal at hand. Negotiators often believe that failing to win an argument or negotiation means losing face or credibility, whether they realize it or not.

Persuasion, a tactic that means convincing someone else to accept what we want, is a common strategy many negotiators deploy when they’re motivated by the drive to win and prevent a potential loss of credibility.

Persuasion works only if the other side drops its resistance and agrees to what’s requested. When persuasion is not successful, many negotiators don’t change tactics, but instead frequently repeat the argument, hoping the problem was that they weren’t clear the first time. More likely, the issue is that the other side just doesn't see the situation in the same way, and repetition is unlikely to succeed.

The difficulty is compounded if the other party also relies primarily on persuasion to maintain that their point of view or position should be the basis of agreement. When both sides rely on persuasion, the result is a stalemate and both parties hope that the other side will blink first. Each side escalates its arguments, tension increases, emotions grow hot, and the possibility of one party considering the other’s point of view can dwindle to zero. It’s like the negotiators are caught in a persuasion loop.

When a negotiator perceives a coming deadlock because they’re caught in a loop, they need to pivot and consciously use a different strategy. It’s time to change tactics before it’s too late.

I observed an example of a possible persuasion loop when I followed the public exchanges between the Federal Aviation Administration (FAA) and the wireless communication companies around the 5G rollout in the US.

Last fall, the FAA issued a formal warning about the risk of the 5G frequencies’ interference with flight equipment, specifically the radar altimeters that tell pilots how high the aircraft is and are critical in poor weather. It seemed the FAA was trying to persuade the 5G players to delay deployment of those frequencies. The 5G players essentially also applied persuasion, bringing to the table that 5G wireless communication is used elsewhere in the world without any safety issues.

Predictably, both sides dug in their heels regarding their positions. The tension in the public exchange was palpable. I can imagine the level of frustration and stress behind the scenes as warnings of threats started to appear and time grew scarce.

Fortunately, each side modified its respective proposals rather than pressuring the other side to quit resisting. Both sides started negotiating, and it changed the entire conflict dynamic. In exchange for deploying the 5G networks, the wireless communication companies conceded a six-month buffer zone around 50 airports. New issues will likely force the agreement to evolve, but these opponents now have a framework for future resolutions.

While the 5G issue participants realized they needed to switch tactics, sometimes individuals are too close to their conflicts to know when persuasion stops working. When negotiators fail to avert a deadlock, their negotiation can fail, bringing about the loss of face or credibility that they were afraid of in the first place, compounded by a lack of trust with their negotiating partner. If the impacted relationship continues, such a failure can sour future interactions and deals.

Skilled dealmakers have the ability to perceive hazards like an approaching deadlock, and they possess the capacity to move to another tactic. Being flexible when working through a deal is not a sign of weakness. Professionals with developed negotiation skills often avoid linking negotiating fears to their feelings of self-worth. Dealmakers who expand their skill sets unlock their success.